THE BATTLE AT LAKE CHANGJIN (MAND)P13

The story takes place in winter, 1950. In the freezing cold Changjin Lake region, a bloody battle between the United States and China begins. Faced with the harshest conditions of extreme cold, lack of rations and vast difference in weaponry, the Chinese troops forge ahead, fearless and determined. They successfully blow up the Shuimen Bridge, making the most critical victory in the war to resist U.S. aggression and aid Korea. Directed by A-list directors Chen Kaige, Tsui Hark and Dante Lam, the film is considered one of the most expensive Chinese films ever made, with a budget of over USD 200 million. 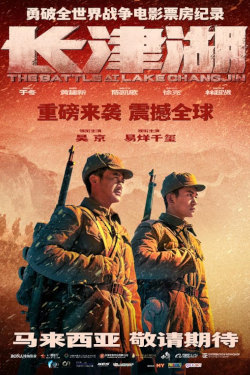