MINIONS: THE RISE OF GRU(E)P13

Growing up in the 1970s, Gru is a fanboy of Vicious 6, a supervillain supergroup led by legendary fighter Wild Knuckles. When the group oust their leader, Gru decides this is his chance to join them. Together with his loyal Minions, Kevin, Stuart, Bob and newcomer Otto, he builds their first lair. He and his Minions also experiment with their first weapons and pull off their first missions. Unfortunately for Gru, he fails to impress Vicious 6 during his interview with them and only succeeds in becoming their mortal enemy instead. Now Gru, realising that even bad guys need help from their friends, has no choice but to turn to an unlikely ally, Wild Knuckles, in order to save himself. 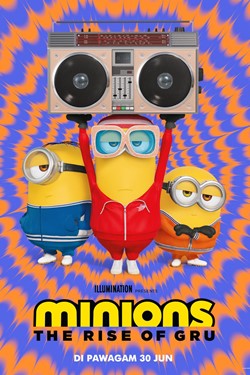